Are Your Teeth Toxic?

As many as 180 million Americans have more than a half billion teeth restored with fillings made with mercury amalgam.* Dental amalgam is a mixture of metals, consisting of liquid mercury and a powdered alloy composed of silver, tin, and copper. About 50% of an amalgam filling is elemental mercury. Why is this filling material potentially dangerous to your health?

Mercury amalgams (known in slang as “quick silver”) were invented in England in the early 1800s as an illegal black market product. Interestingly, the Germans called this product“Quack Silber” and from this pronunciation dentists throughout Europe using amalgam fillings came to be known as “quacks”.  A word that we associate today with doctors using unproven or questionable procedures.

In the early 1800’s American dentists were instructed by The American Society of Dental Surgeons not to use mercury based amalgam fillings because they considered mercury a toxic health hazard.  Unfortunately, the only alternative materials were very expensive and technically difficult.

At that time anyone could hang out a shingle as a dentist and there were fewer than 300 actually “trained” dentists across America. Many of these “untrained dentists” started using mercury amalgam because of it’s low costs and simplicity of use.

In 1856 the newly formed American Dental Association claimed that mercury fillings were safe and that dentists who said otherwise were “unethical”. As our opening statement shows, mercury amalgam had become the material most commonly used for fillings for decades and until the late 1990’s we had very few alternatives. Today composites and porcelain are definitely superior alternatives, but some short-sighted insurance companies will still only pay for the cheaper mercury amalgam fillings.

Why We Are Mercury Free 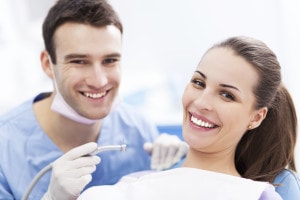 Because of his commitment to offer his patients only the most advanced and safe technologies, Dr. Merrill has not placed a mercury filling in over 20 years.

If you have mercury fillings, they are a risk factor that can easily be eliminated from your mouth if you choose. To dispose of this toxic material, we use state-of-the-art amalgam waste technology to keep the mercury from removed fillings from contaminating the environment. And for those dealing with mercury toxicity we offer extra protection when removing mercury fillings.

We know you probably have questions about the risk of amalgam fillings and we would love to answer them for you. Call our office today and schedule an appointment with your dentist in Huntersville, Dr. Merrill. He will help you find the safest and healthiest alternative available.