Looking for a Rock Star Dentist in Huntersville? 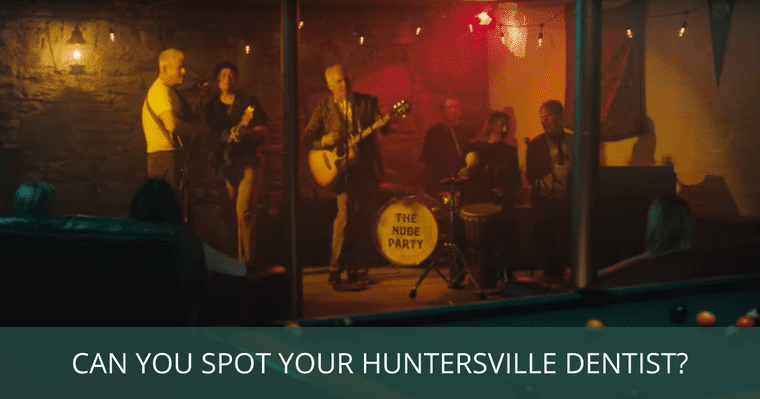 Our very own rock star dentist, Dr. Merrill, has made it to Rolling Stone! Well, in a way. Have you heard of The Nude Party? Dr. Merrill’s two sons play lead guitar and keyboard of this six-man alternative band that recently signed a record deal with New West Records and appeared in Rolling Stone magazine. Their self-titled debut album comes out July 6 (check it out).

One of The Nude Party’s newest videos climbing the charts is entitled “Chevrolet Van”. It’s an easy-going, country twang tune that shows band members living boring office lives interspersed with clips of them rocking out in a rundown bar. It’s a comment on the lifestyle they love and response to those who may have discouraged them. As patients of Dr. Merrill, you may be entertained by seeing your Huntersville dentist in the flash-forward scene at the end of the video along with the other band members’ fathers! Watch it now:

Did you spot Dr. Merrill at the end of the video on keyboards? Some of the video was actually shot inside our Huntersville dental office!

What’s next for the band? After the launch party and album release this summer, the band is going on tour! Follow The Nude Party on Facebook and Instagram for their 2018 tour dates schedule. Learn more about the band by reading the Rolling Stone interview with lead singer, singer Patton Magee or watch their next new single, “Records” on YouTube.

Being the father of two rock stars definitely helps, but if you haven’t heard, Dr. Merrill is a 5-Star dentist in his own right. He’s famous in the Huntersville area as a premier cosmetic dentist who’s attention to detail, caring manner, and advanced education make him sought after for everything from teeth whitening and porcelain veneers to smile design and full mouth rehabilitation. As an AACD-accredited dentist, Dr. Merrill has completed an extensive and comprehensive process to establish himself as a leader in the cosmetic dentistry field. You can be confident your smile is in the best hands!

We’re sure Dr. Merrill would happily sign autographs at your next dental appointment. Find out how Dr. Merrill can transform your smile or just keep your pearly whites camera-ready!

What did you think of Dr. Merrill’s performance in The Nude Party’s “Chevrolet Van” video? Let’s give him a virtual standing ovation!